by Shayla Cherry| Updated October 27, 2022
Connect us with your school principal! We make sure students get the career help they need. Click here to learn how we do it!

Are you considering JROTC or wondering how to pursue an ROTC scholarship? This guide will tell you everything you need to know in order to make an informed decision. 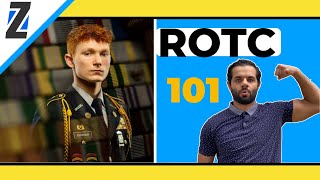 In this article, we’ll go into detail on each branch, scholarship requirements, and more.

The training of “citizen soldiers” began in 1819 with Captain Alden Partridge, a former military academy superintendent. He established the American Literary, Scientific and Military Academy, which eventually became Norwich University.

It was Partridge’s vision that university students receive military training so that there would always be educated officers available to serve. Many other institutions were founded in the image of his academy in the following decades, and some preexisting schools added compulsory military training.

The Morrill Land-Grant Act of 1862 granted each state 30,000 acres of public land to establish universities and centers for research. These land-grant institutions were required to offer military tactics courses. By the early 20th century, over one hundred colleges and universities across the country offered military training.

The National Defense Act of 1916 placed the training of future military officers under a single, federally-controlled entity called the Reserve Officers’ Training Corps. Colleges and universities with ROTC programs were given military training instructors and money for supplies.

The Reserve Officers’ Training Corps began accepting women in 1972. ROTC graduates include retired General Colin Powell, James Earl Jones, and many NASA astronauts. Today there is a wide range of ROTC programs offered in over one thousand locations across the country.

What is the purpose of ROTC?

The Reserve Officers’ Training Corps exists to train college students for future service in the U.S. military. It provides full scholarships to qualifying students, who are then obligated to serve at least four years on active duty. Students take military science courses in addition to normal college coursework, preparing them to become officers when they graduate.

Do all colleges have each branch of the ROTC?

Large public universities are more likely to have ROTC programs.

Participating in ROTC is not the same as attending a military academy. ROTC students attend classes alongside college students with no military commitment, whereas every student of a military academy is committed to serving after graduation for a minimum of five years.

Military academies are very selective. There are five:

Do I enlist for ROTC or is this different?

Students must enlist to receive a scholarship.

It’s possible to participate in ROTC for a year or two without committing to military service. Students can enroll in the ROTC Basic Course without enlisting. Students who wish to continue on to officer training must enlist.

Can I be a part of the ROTC without committing to service in the military?

Enrolling in the ROTC Basic Course or participating in the JROTC does not obligate you to serve in the U.S. military.

Those who enroll in the Army ROTC Advanced Course must serve full-time in the Army for three years and then serve five years in the Individual Ready Reserve (IRR). Scholarship recipients must serve four years on active duty and the remaining four in the IRR.

Anyone who accepts an ROTC scholarship from the military must agree to serve as an officer for a number of years (usually four or five) following graduation. Even once your time is up, leaving the military after becoming an officer is a complicated process. Take the time to speak to active and retired officers before making your decision.

Which branches of the military offer ROTC?

Each branch of the military offers its own ROTC program.

The AROTC offers a wider range of options than any other branch. Over 1,100 college and university campuses offer Army ROTC programs. They offer a wide array of career opportunities in more places around the world than any other program.

AROTC cadets are allowed to major in almost any academic area.

Applicants must complete a physical fitness test, which consists of one minute of push-ups, one minute of curl-ups, and a one-mile run. There are also weight requirements according to height.

AFROTC cadets must also meet fitness standards. There are minimum and maximum allowable weights according to height. Cadets must complete a Physical Fitness Test twice a year. The test includes one minute of push-ups, one minute of sit-ups, and a 1.5-mile run.

In their sophomore years, cadets must take the Air Force Officer Qualification Test (AFOQT), which is similar to the SAT and ACT. This test measures verbal and mathematical aptitude, and also “aptitudes relevant to certain career fields”.

Navy ROTC students choose one of three career paths: The Navy Option, The Marine Corps Option, or The Nurse Option.

The Marine Corps Option funnels its students into commissions as second lieutenants in the US Marine Corps.

The Nurse Option is for students who want to pursue a Bachelor of Science degree in Nursing. Graduates serve in the Navy Nurse Corps. These students still need to complete basic military training courses such as Seapower and Maritime Affairs and Introduction to Naval Science.

There are 153 campuses that currently offer these programs.

The Coast Guard does not have its own branch of the ROTC.

They offer a scholarship program called the College Student Pre-Commissioning Initiative. Like ROTC, this program guarantees students an officer position upon graduation. This scholarship is only available to college students enrolled in certain schools.

CSPI students enlist in the United States Coast Guard, complete basic training during the summer, and receive a full ride for up to two years of college. These students receive money for their tuition, books, and fees, and a full-time Coast Guard salary, housing allowance, and medical benefits.

While they’re in school, students participate in mandatory activities for at least 16 hours each month. They must dress in uniform at least once per week and attend Coast Guard trainings on school breaks.

After graduation, CSPI students attend officer candidate school in New London, CT. When they’ve completed this 17-week course, graduates receive a commission as an ensign and an assignment with the Coast Guard.

There are also programs for high school students called JROTC. The Junior Reserve Officers’ Training Corps is about “developing good citizens” and does not require any commitment to military service.

As with the ROTC, each branch of the military has its own JROTC program. Some schools allow students to participate in JROTC in place of taking a physical education class. Over a quarter of a million students participate each year.

Participation in the JROTC is not a prerequisite to joining the ROTC.

Why should students consider ROTC?

Participation in ROTC provides college students with community, structure, and purpose. Eligible students will receive scholarships that pay for their tuition, books, and living expenses. They serve their community during their time in college and serve their country upon graduation.

Students who join the Reserve Officers’ Training Corps need to be extremely dedicated.

You would be committing up to 12 years of your life to study and military service. Students who fail to meet graduation requirements are still required to serve; they may even be required to serve additional time to compensate the military for scholarship expenditures.

ROTC programs offer students the opportunity to develop a wide range of skills. You’ll learn leadership skills and the technical skills needed to pursue a lifelong career in or out of the military.

How can I get the ROTC scholarship?

ROTC students who meet the strict academic standards set by their branch are entitled to scholarship benefits. The ROTC scholarship pays full tuition and fees, including a separate allowance for books and a monthly stipend. Applicants must be U.S. citizens.

The AROTC offers a full four-year scholarship to high school students and graduates under the age of 26. This scholarship requires a GPA of at least 2.5 and a minimum of 1000 on the SAT (math/verbal) or 19 on the ACT (excluding the required writing test scores).

Scholarship recipients must pass the Army Physical Fitness Test (APFT), which consists of one minute of push-ups, one minute of curl-ups, and a two-mile run.

Recipients must commit to eight years of military service: four years of full-time service in the Army and four years with the Individual Ready Reserve.

Most of the remaining scholarships are given to foreign language majors. Common languages like French or Spanish won’t cut it. The Air Force is looking for the following languages:

If you receive a scholarship, you’ll need to agree to a number of conditions. If you are underage, your parent or legal guardian will also need to sign. Scholarship recipients must agree to:

The Navy only accepts scholarship applicants between the ages of 17 and 23. Like the other branches, they have height/weight standards and physical assessments.

If you were unable to take either exam, you’ll need:

Scholarship recipients must participate in weekly drills and attend summer trainings. They need to pass regular physical fitness tests, which include push-ups, pull-ups, crunches, and a three-mile run.

They must maintain a GPA of 2.5 or better while they carry a normal course load and complete certain courses specified by the Navy, including:

Graduates are required to serve four to five years on active duty.

Do you want to pursue an ROTC scholarship?

If you need more advice, Transizion can help! Our counselors will review your transcripts and help you determine your target, reach, and safety schools. We also offer tutoring.