by Ashley Cullins
Updated October 27, 2022
Reading Time:0 min
Connect us with your school principal! We make sure students get the career help they need. Click here to learn how we do it!

Besides geography, these 8 institutions share something else in common: acceptance rates hovering at or below 10%.

Dive into this comprehensive list with exclusive profiles of each Ivy League school. You’ll learn about each school’s:

With this information, you’ll be on your way to narrowing down your list of colleges to apply to and may even find your dream Ivy League destination.

Grab a jacket, and let’s take a trip through the Northeast! 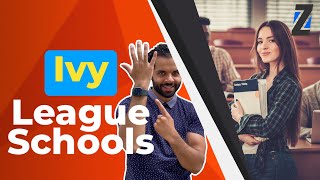 Click above to watch a video on Ivy League Schools.

What Is an Ivy League School?

The Ivy League began as a collegiate athletic conference of sports teams from each of 8 outstanding schools.

This is why Harvard and Yale students still gather each year on Thanksgiving to witness “The Game” – a high-stakes match of football played between the two rivals.

Established in 1954, the Ivy League has come to symbolize academic excellence more than athletic ability.

Ivy League colleges pride themselves on accepting only the best, and they can stand to be selective.

Today, Ivy League schools have lower acceptance rates than ever due to skyrocketing applications, but there are real keys to unlock those golden doors. One of those keys is knowledge, so let’s learn the important and interesting facts about each Ivy League school.

The oldest of the Ivy League institutions, Harvard University is synonymous with brilliance. Unlike the smaller Ivies like Dartmouth or Brown, Harvard’s name and reputation are famous around the globe.

Scholars travel from as far away as Africa to study at Harvard, as, notably, Barack Obama, Sr. did on a scholarship.

Other than its five centuries of history, what makes Harvard so compelling? The answer is in the academics.

Speaking of government, Harvard has the distinction of having graduated the most U.S. Presidents: 8 out of a total of 15 who earned degrees from Ivy League schools.

Harvard’s famous rival, Yale, isn’t too far behind, with 5 of 15 Ivy League presidents having graduated from the nation’s third oldest university.

A gritty urban setting in the heart of downtown New Haven contradicts the centuries-old Gothic architecture that characterizes Yale University.

History, political science, and economics form the backbone of Yale’s undergraduate majors, but the university is also famous for its #1 rated law school and MFA theater program.

One of Yale’s most special offerings for undergraduates is its residential college system, a designation the Ivy League school uses instead of “dorms.”

Students are assigned to a residential college in freshmen year and will remain as part of that individual community throughout 4 years of study.

Each residential college has its own dining hall, courtyard, and other communal features to bring students together.

While some may claim that Yale lives in Harvard’s shadow, the #3 school in the nation has plenty of unique benefits that set it apart from the other Ivies.

Nestled among the cherry blossom trees of suburban New Jersey, Princeton feels a world away from nearby New York City.

The campus is so picturesque that it has provided the setting for several blockbuster movies including A Beautiful Mind.

But there’s much more to the nation’s undisputed #1 university than a scenic location.

Further, Princeton sponsors eating clubs for juniors and seniors. The clubs provide a social outlet for upper-class students and are a Princeton cornerstone that many freshmen and sophomore students eagerly await.

These exclusive dining clubs are almost as prestigious as the numerous Nobel laureates, Pulitzer Prize winners, and MacArthur fellows who teach at Princeton.

In the most rural setting of all 8 Ivy League schools, Dartmouth is unique for its designation as a “college” rather than “university.”

Dartmouth does, however, offer graduate degrees in addition to undergraduate degrees. Off the beaten path in rural Hanover, New Hampshire, Dartmouth excels in the staples of economics, government, and history.

Academically, Dartmouth is considered a school with “very high research activity” according to the Carnegie Foundation.

Solid programs in engineering and medicine contribute to Dartmouth’s standing as a research behemoth in a small package.

Perhaps most famous for its business school, Wharton, the University of Pennsylvania also has a number of outstanding bachelor’s degree programs.

Finance and economics are two of the top majors at UPenn, along with nursing, a major not in the top 3 of any other Ivy League school on this list.

As a sizable university enrolling more than 10,000 students, UPenn offers an exhaustive curriculum in every field imaginable.

If you’re preparing for a career in science, Cornell University may be the ideal Ivy for you.

But Dragon Day isn’t the only quirky aspect of Cornell University. The school has one of the nation’s top-rated veterinary programs and hotel-restaurant management curricula, distinguishing it from its rival Ivies.

At the pulse of arguably the world’s greatest city, Columbia University appeals to a student population as diverse as Manhattan itself.

Economics, political science, and psychology head off the list of popular majors at Columbia, but the school possesses an equally solid English and humanities curriculum.

Columbia is also notable for its Teachers College, making it a popular choice for future educators.

In partnership with the nearby Rhode Island School of Design, Brown University offers a diverse curriculum whether you’re an aspiring doctor or designer.

Eclectic activities like Brown Ballroom Dance and the Brown Jug comedy magazine let students tap into their creativity. The Brown Bears team is also a powerful force in collegiate soccer.

At Brown and the small but charming city of Providence, there’s never a shortage of things to do.

Which Ivy is Best for You?

While the figures may seem discouraging, there is hope for acceptance at your dream school. Here are a few things you can do to increase your chances of admission to an Ivy League school:

There’s no magic formula to gaining acceptance at an Ivy League school, but there are ways to put your best foot forward and sway the odds in your direction.

One great way to transform your reach school into a target school? Focus on polishing your college essay and supplements for an even better chance of acceptance at the Ivy League school of your dreams.

Set a foundation for a successful career and pursue the best professional opportunities.

What to Expect From Your First Corporate Job
The Top Combined BS/MD Programs: 23+ Schools for Medical All-Stars
20 Hardest Majors: The Ultimate Guide
Scroll to top