Calculus AB vs BC: Everything You Should Know

by Mary Dean
Updated October 27, 2022
Connect us with your school principal! We make sure students get the career help they need. Click here to learn how we do it!

If you’ve stumbled upon this article, then you’re probably asking yourself “What is Calculus AB vs. Calculus BC” or “Which one should I take?”

These are questions that many students and parents have when preparing their high school and college schedules, so you’re not alone.

Figuring out the answer requires you to learn what both courses offer, their exam set-ups, and weigh this information against your credit requirements, and academic/personal goals.

We’ll start by looking at a general overview of calculus and then the Calculus AB and Calculus BC options individually. Click above to watch a video on Calculus AB vs BC.

What is Calculus? A Brief History

If you polled 100 people on the street and asked them the question “What is calculus?” a majority would answer something along the lines of “hard math.”

It’s not until a person is faced with the task of choosing between math courses does one actually consider what these courses of made of.

Calculus is a problem-solving branch of mathematics that does the following:

Both Isaac Newton and Gottfried Wilhelm Leibniz independently discovered the concepts that makeup calculus in the 1600s. People have been using it to create mathematical models ever since.

The discipline grew out of the desire to understand natural phenomena, such as orbiting planets and gravity, in a deeper way.

This explains why so many science-based fields require an understanding of calculus.

The field of engineering, in particular, requires its specialists to understand the mathematical study of change.

Many engineers use calculus in their everyday designs, using it to decide on the size and shapes of curves when building structures.

Although it’s a dreaded subject by some, calculus is very useful as it can help you solve problems in many other fields including engineering, physics, economics, biology, and medicine.

Who knows? Maybe this can be one of the easier courses you take!

Calculus: The Make-Up of this Subject

Pre-calculus is usually a requirement, especially at the college level.

This leads us to an important point: there are two different types of calculus: differential calculus and integral calculus.

Calculus AB vs. BC: A Closer Look

The main thing to remember about the difference between BC and AB is this:

Unlike courses like Algebra I and Algebra II, Calculus AB (Advanced Placement Calculus) and Calculus BC do not have to be taken in a specific sequence.

These two calculus courses are different in scope, but not necessarily in complexity.

Calculus BC is only considered a more difficult course by some because it covers more material.

Calculus AB vs. BC: Key Differences

Here are some fundamental similarities and differences between the two:

Calculus AB vs. Calculus BC: Scope and Sequence

Although the sequence of the topics can vary by school and course, the T-chart below provides a general comparison of the two different tracks. 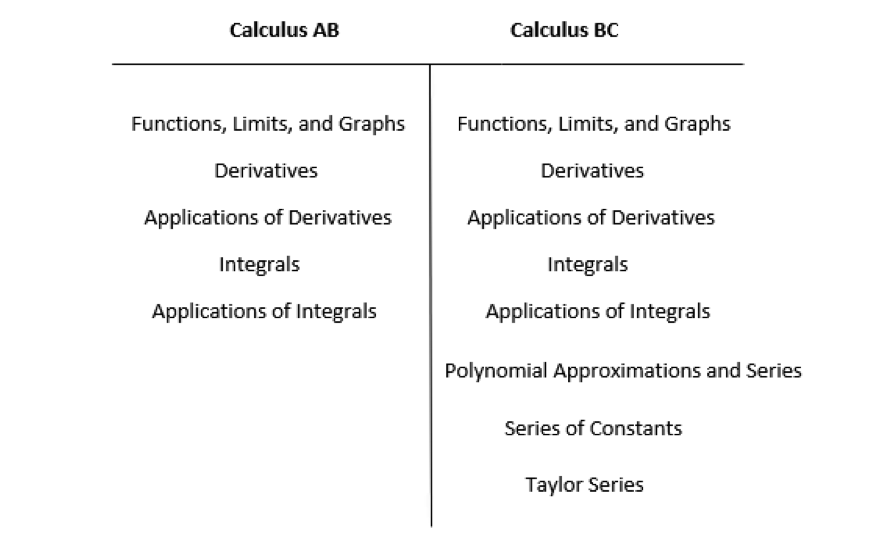 As you can see, Calculus BC is not a different course from Calculus AB; it is a more in-depth version!

Calculus AB and BC Exam Overview

When deciding on which type of calculus to take, it can be beneficial to take a more in-depth look at what is included in the exam for each course.

This will allow you to decide if you’re ready to take on either course of study or maybe even both.

According to the Princeton Review, AB typically includes the following:

All of these topics will be on the BC exam as well. The test will also cover:

Many of the same topics found on a Calculus AB exam will also appear on a test assessing the understanding of Calculus AB.

When it comes to AP exams for college credit, The College Board schedules both the Calculus AB exam and the Calculus BC exam at the exact same time.

The exam structures are identical, as is the amount of time you get on the test. The main difference is what is included.

This isn’t to say that the BC test is harder.

In fact, many students find Calculus BC’s exam to be less challenging because of the way the material is distributed.

Because there are more topics to cover, the questions are not heavily focused on any one particular area.

This allows for more ‘breathing room’ if you struggle with a particular concept.

Now that you understand the difference between the two courses, you may be trying to figure out which to take.

There is no right or wrong answer here. Most students go one of three routes:

Although you will get more college credit for taking Calculus BC, it is not always the right option.

The same can be said for students who struggle with math and think that a fast-paced course like Calculus BC will be too challenging for them.

Benefits of choosing this option include:

Choosing Calculus BC Only

If you’re a good math student, like a challenge, and know that you will need both Calculus I and II for your major, skipping Calculus AB and taking BC might be your best bet.

Taking Both Calculus AB and Calculus BC Courses

Most colleges will not give you credit for both Calculus AB and Calculus BC, so taking both courses would be pointless.

However, some unique circumstances would make this a smart choice.

Taking Calculus BC can be a ‘refresher course’ in a sense.

Just remember that Calculus BC is a year-long course of study, so you wouldn’t want to try and take both of these courses at the same time.

Which Should I Choose, AB or BC?

Now you’re at the crossroads where you must decide which course to choose.

If you’re still reading, then you might not have the answer just yet.

If so, ask yourself the following questions.

When taking Calculus AB, you will be learning about limits, definite integrals, derivatives, as well as the Fundamental Theorem of Calculus.

Calculus BC will take your learning further, throwing in more advanced concepts.

If calculus is a required part of your course of study, it is important that you make the right choice when choosing which path to take (Calculus AB vs. Calculus BC).

Your answers to the questions above can serve as a guide.

How to Get Into Vanderbilt
Junior Year & How to Beat It: A Winner's Guide
Test-Optional Colleges: The Ultimate Guide
Scroll to top